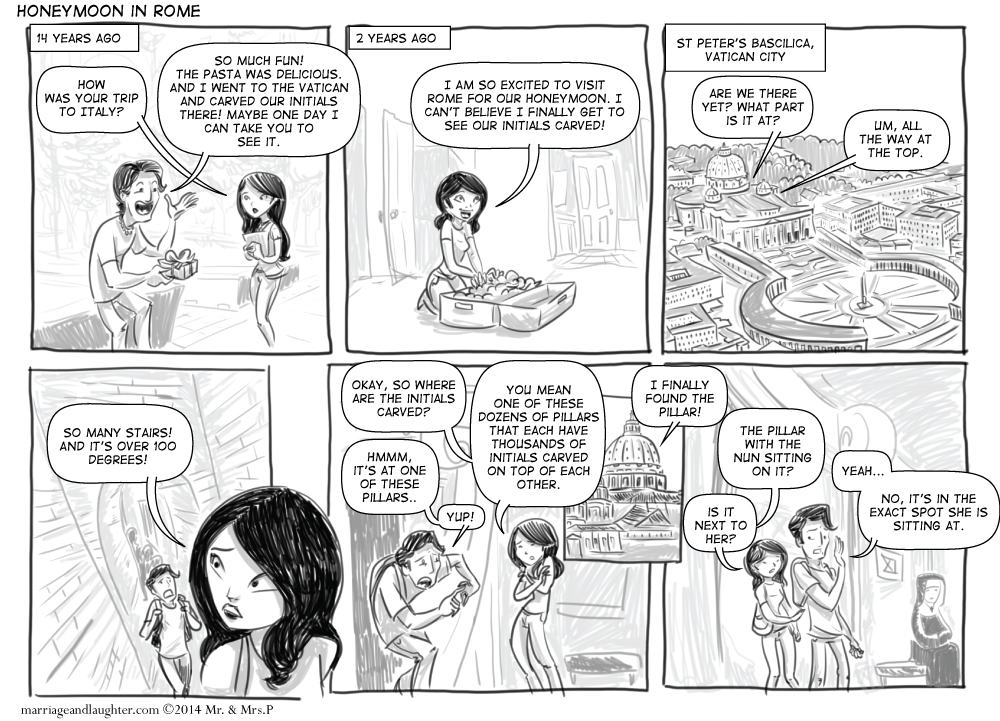 Last week, Mr. P and I celebrated our two year anniversary! We are now entering “Married Life Year 3.” Since we normally post on Thursdays, I thought we’d do a “Throwback Thursdays” post, reminiscing about a particular moment during our honeymoon. Unfortunately, life happened, and we didn’t quite get around to finishing in time for a Thursday post. And by life, I mean the flat tire I got on the way home and the discovery that my car model does not come with a spare tire. Also every car shop nearby that had my tires were closed for the night. Ugh. Luckily, everything worked out well the next day.

So onto this comic. When we went on our honeymoon, I thought it would be the most romantic thing in the world to revisit the spot where Mr. P carved our initials during the first year we were dating. Of course things never turn out how you imagine. If you’ve ever visited St. Peter’s Basilica, you know that there are literally millions of carved initials because all the tourists that pass through have the same idea.

And of course, when we finally made it to the top, we discovered that Mr. P had carved the initials in the exact area where a nun was sitting and resting. I swear, every other pillar and bench was free that day except that one. We hung around the bench while we wondered how we were going to explain to the nun that Mr. P had defaced church property. After spending some time chatting, we learned the nun had actually grown up in the same city as Mr. P’s dad. After this bonding moment, Mr. P finally got the courage to confess. The nun graciously gave up her seat (I can’t believe we kicked a nun out of her seat…) so that we could search for the initials.

We eventually did find Mr. P’s because he has a very distinct way of writing them. We never quite found mine. But it was still a great memory.