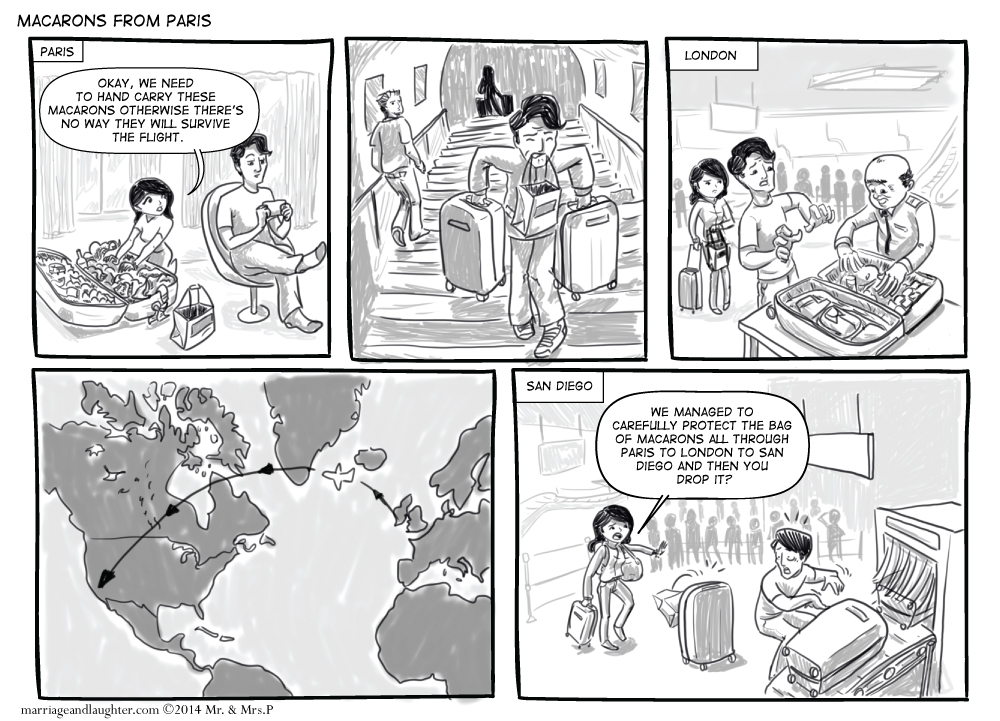 For the record, I carried the macarons around for half of the trip while Mr. P did the other half. Also he did not have to carry them in his mouth. A little dramatic on his part…

So one of the things we brought back from Paris was macarons. I fell in love with Pierre Herme macarons during our honeymoon in Paris two years ago and have been wanting them again ever since. I also had a few people I wanted to gift them to. But because they are so delicate, we had to hand carry them, which was a little trickier this time because we were taking a train back to London, then public transportation to the airport, to go back to San Diego. The staircases were particularly annoying, especially since we each had two bags.

So yes, these macarons survived through our walk from Paris to to the Eurostar. From the London Eurostar station to Heathrow Airport. And from there, the flight to San Diego. And after all that, while waiting in immigration at SD airport, Mr. P left them on an unstable suitcase and they dropped to the ground. Oi.

Also, once again, Mr. P was stopped with his luggage. Normally its because of all the food we have crammed in there, which always leads for some interesting conversation. This time though it was because of his tablet. Apparently in Europe you do have to remove that during security check. Well Mr. P always has a zillion things crammed in his backpack that he did not need and the security person went through every single one! Dozens of cables, plugs, pens, etc. We were stuck so long that we nearly missed our flight. But luckily we did make it back. And the macarons were more or less intact, though some crumbled a little.